There are a few App Wall implementation available for us, the Android developers. How is your's performing? How have you implemented the app wall? Which app wall are you using?

After a while using the walls (AppBrain's and Leadbolt's mainly), I might just have the answers to the above, the best wall to use and the best implementation strategy to monetise your Android apps well.


All in all you're just another brick in the wall!

Have you heard that song from Pink Floyd? It is SERIOUSLY AWESOME! You should check it out. It does highlight my age now doesn't it? Actually I was born after the era. So I am young enough. I just love the classic rock genre!

On to the post-Y2K era, and we have a new type of wall. A wall that is not filled with bricks, but with apps and ads! A wall that makes us money!

I hope you have considered implementing one type of wall or another in your apps. It does generate quite some revenue. The strategy is probably more suitable for games or less serious apps (like weather or rss reader apps), and from my observations, will look quite out of place for more serious apps like business apps.

There are a few choices out there. Many options for walls are available that does not require an SDK integration. Unfortunately, from my experiences (as shared here too), only AppBrain's wall is truly performing. Now you might have a different outcome, and if you do, please share your results. Different apps and different implementation strategy yields different output. So what I say here in this blog is my own observations, and you should use it only as a guide. Experiment with your apps.

AppBrain's walls are so successful for one major reason, they have really good games and apps on there. Maybe it is because AppBrain has been long enough in the business that more developers are used to them as an alternative to the Android Play / Market?

I guess it is important that the apps shown are relevant to what users will want. The walls of, for example Leadbolt, show apps which honestly are less attractive. It might be attractive for others, and lets understand that I cannot be saying what others like or not, just that the results from my app wall implementation shows it.

Have you played the Command & Conquer games? I especially loved the Red Alert version. That marching sound of the Soviets before that hard guitar kicks in really sent shivers down my spine.

App wall inplementation strategy is important, just as it was for your C&C games. I have tried implementation in 2 ways. I have been wondering all this while why one of my apps which has about 50% less daily downloads, has close to as much revenue from another games which gets about double the download count.

So I booted up the apps, and here are the screenshots of my Softball Game (the one with lesser download), and my in-famous (read why here) Tennis Game: 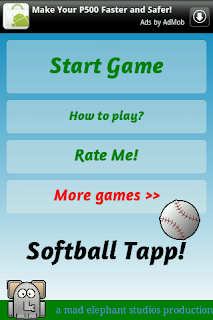 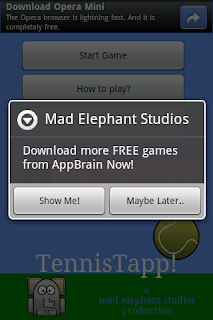 
Notice how the app wall access is presented? The "More Games" button on the softball game actually works better than the normal pop-up when you try to quit the game.

The are a few more options of how you'd go about showing the walls. Some people use a tab format, adding a new tab which will load the wall. Another strategy is showing another screen instead of dialog when user quits. A full activity showing images of various apps and a button asking if users would like to download more apps would be better than just a plain dialog.

Off to conquer the world..

So, I am guessing you now know what I am gonna be busy doing eh? I'd be going with the "More" button strategy. Lets see the revenue gain!

Much success to your walls... don't just sit there watching the paint dry! Get them walls in!