Hey folks, and welcome to a brand new week. And the end of April.

As the month comes to an end, I think it is a good time to reflect on stuff, on your apps, on your monetising strategy, and looking forward, whats the plan going into May?

Although I mentioned that April was a slower month that previous ones, the last couple of days has seen a very good boost for my revenues from Leadbolt, AppBrain and AppLovin. Admob too to a certain extent. Now Airpush? Lets not get into that shall we?

A while back, one of the regular visitors here, Bojan, asked about games release timing. Let's talk something about this. Hope we can get feedback and ideas from others too.

Less than a year ago, actually, the Just-In List was a totally different game to release apps and games. You'll make updates every 8th day, and release it to the market, and you'll show up in the Just-In list. And that got you pretty good downloads.

With that out of the picture, when do you release your games?

And the now.. timings.

Let me share a couple of instances when my games were in the trending lists. I have had 3 games in the trending lists so far, and all happened last year. My soccer game, my in-famous tennis game (which just broke the 100k downloads last week!), and my hardly downloaded anymore game, Pumpkin escape.

Now, why the soccer game got into trending is beyond me. I have no idea why it did that. Maybe just my luck.

For the tennis game, I accidently released it a couple of days before a big tennis tournament was on that weekend. I was totally not aware of the tourney, but it gave me a good boost for a while. Too bad I only had Admob in the app back then, otherwise I would have seen an even better revenue increase.

The pumpkin escape game was released close to halloween. Need me to elaborate on this further? You get the idea.

Basically point number 1, release your games in conjunction with a big event. Have a look at my download boost when the super bowl was around.

Don't be an enemy of the States!

The Grand ole US of A. Nothing, absolutely NOTHING comes close to making money for your ads besides the US. The population is huge, the spending on mobile advertising is really huge too! Here is my latest 7 days chart from Leadbolt. Do you get the picture? 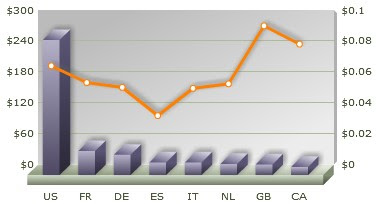 Now, if you're serious about making money from mobile ads, you really need to target the US. Your revenues will be given a huge boost. Don't make a Zimbabwe's underground train schedule app, make something for the NY train system instead.

Note - Africa could be a good revenue source someday, just not yet.

This is important too. Why do you think many of us made a good fortune back in December? Well, the logic goes that in December, many people buy new devices. This in turn gives a good boost to our download rates with a whole bunch of new potential customers.

So, look out for new major release of phone or tablets. Or a new version of the phone OS. These are good moments to make sure your app is out there.

This is very interesting. And I have not seen this mentioned anywhere else. And I could be wrong here. But making sure your app is out by Wednesdays will be a very good idea. Why? I have noticed that many of the ad agencies seem to have a good boost on Thursdays going through the weekend.

This is just my gut feeling here, but maybe the ads inventory is renewed on Wednesdays / Thursdays. Have a look at your own revenue patterns over the weeks, especially with Leadbolt.

I have read it somewhere that most app downloads happen on Sunday nights. Ok, you know what to do on Friday night then. No more partying, get them apps out!

It all boils down to one thing though. After all this time, there really isn't a good time to release a game or app. Just release it when you feel like releasing it. Really, it does not matter when you release it. There is no big advantage of being out there at any moment. The advantage is that you ARE out there.


When the above events occur, you better make sure that your app is searchable. That you can get to your audience. Being an entrepreneur, you really lose when you're not out there. The missed opportunities it is called.