- August 06, 2014
Slightly over a couple of weeks ago I published a football goalkeeper 3D game on Google's Play Store. I am sharing the trials and tribulations (dramatic huh?) of publishing a new Android app, and what one can expect out of monetisation from it.

Here is the follow up to my live new Android app publishing and monetisation experience.


I'm overall not quite happy with the rate that this one has gone. Though it started off pretty well, it never picked up after the initial momentum.

Total downloads as of 5th August is slightly above 27k. The game went live on 21st July, so in about 2 weeks, it is averaging about 3k downloads daily now. In the remaining 2 weeks, if the 3k daily downloads stay , this game would be in the 50-100k downloads range.

Not really where I'd wish it to be. I was hoping it would have hit the 500k-1m range instead. Hey we can dream right? Might as well dream BIG!


The game hardly made an upward move on the rankings. Its been stuck between numbers 11 to 14 in top new sports games category. And unfortunately it isn't really ranking anywhere good for its keywords. Will need to look if I would like to fine tune the keywords.

Average rating been fluctuating between 3.7 - 3.8 range. So it is same-ish so far in that case.

Show me the Money


The money generated has been pretty good comparing it against the downloads. I cant seem to load Heyzap's charts on my PC's 3 browsers, so here are the manual stats. 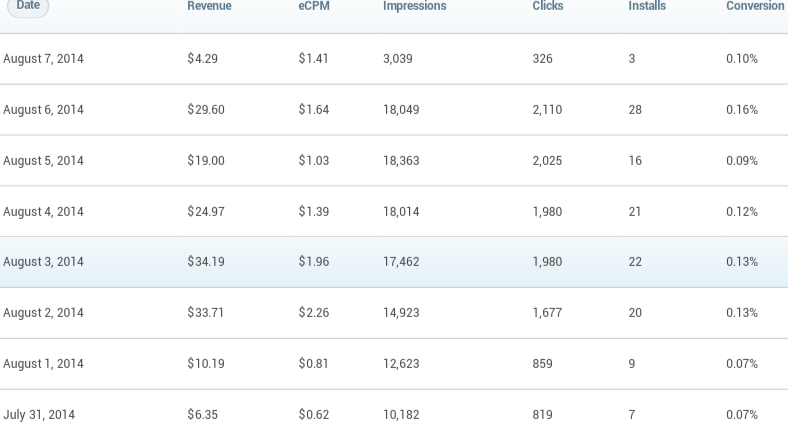 The game has made $221 to date. Assuming there was another 3k-ish downloads on the 6th August, that would mean about 30k downloads generated that $221. Lets see how the rest of the first 30 days go (about 2 weeks left).

From the table above, you can see that in almost every case, each download that is generated on Heyzap generates over $1 in revenue for developers. It's a really good rate, I'd highly recommend you look into Heyzap ads if you haven't.

Also note, there has been a eCPM boost since 1st August, thus I'd assume that ad spend is picking up again. Could be the end of summer holidays, back to school season, new month renewal spend, or maybe Heyzap just acquired better advertisers.


Overall, this isn't bad, considering I bought that game kit from Unity's asset store for $30 (was on sale), spent less than 3 hours to customise it a little, optimise a little code, added library SDK in, and published it. But there really is a much bigger potential with this and it doesn't look like it is gonna get anywhere near that potential at its current rate.

Either way, we'll see how it goes from here for the next 2 weeks.

I'm wondering if I should work on a new game, and use this game's slight momentum to try to gain momentum for that new game instead.

Or should I advertise a little to help this game gain some traction.

Ah! The stuff we developers go through everyday!