Showing posts from February, 2012
Show all

SellARing, Sell your Soul, and the Press

I've been contributing to lots of money making strategies and libraries for the Basic4Android community, and as such, I have to take the libraries further by applying them into my apps. Things like these has its risks and dangers. No doubt, the feeling is still quite exciting.
12 comments
Read more >>

How are your money making strategy progressing? I hope you're doing great. This month of February has been my highest earning month ever with Leadbolt . I've hit $100 a few days this month!
7 comments
Read more >>

- February 22, 2012
A quick update, Pontiflex Library for Basic4Android is released here . Sign up ads are something that I have been waiting for from Leadbolt and Airpush, but they have delayed their release for so long :(  I hope Leadbolt will release theirs soon! Quite an OK revenue source actually this one. Just that their inventory is quite lacking, and does not cover many countries. But give them some time, and I am sure they'll be growing (and 2012 is gonna be THE year for mobile advertising!) Give the library a spin yo! Cheers! -Bill
3 comments
Read more >>

- February 21, 2012
There are a gazzilion of ad provider options you have out there. From the simple banner ad providers like Admob, to Offerwall providers like AppBrain and Everbadge. And then there is Leadbolt .
12 comments
Read more >> 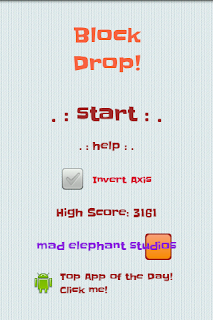 Hi all, I've released my new game Block Drop to the Android market. Could you please download the game and give it some stars and +1.. Thank you! There are many things planned for this game, but I thought I'd release it to see how it goes before I spend too much time on the other features. Will be a tough one to market this fella. Enjoy the screenies: Cheers! -Bill
3 comments
Read more >>

- February 16, 2012
Hey all, I just stumbled upon Everbadge . They are a rather new ad option of you're looking at implementing offer or app walls into your apps. The ads can be implemented for Android, iPhone, Mobile Web or Windows Phone.
8 comments
Read more >>

Further proof that Just-In list is not needed I was wondering how things have gone after the just-in list went missing from Android market apps. Well, for sure my revenue has gone up, and for sure my downloads have had great boosts. Here I am showing further proof why you do not need the Just-In list. Check out the graphs below. They are my Active Installs as reported by the Android Market. (NOTE: This is just the active installs, not the downloads.) Check it out, the graphs show some jaggyness on the left end. These are the times I released an update to the market, and my app got listed in the Just-In section, which provided sudden download boosts. Towards the right side, is the market movement currently, most show a smooth upwards move. Even a game with no major keywords to it has gotten a boost: And the below are a couple of my apps released recently after the just-in list... they had slowness initially, and then a sudden boost for many many days!
1 comment
Read more >>

Basic4Android released a promotional video... looks awesome with some good feature highlighted in the video... and the best part is a little of me is visible in the video! Can you spot it? Cheers! -Bill
Post a Comment
Read more >>

Polyclef - The fall of a role model!

We all have our heroes, our role models, people (or organisations) we look up to. They motivate us, they give us that push. They tell us, "If I can do it, so can you!" What happens then, when a hero falls? A role model crashes right in front of you? Lets have a look at what went wrong with Polyclef, and how we can avoid such a thing happening.
6 comments
Read more >>

- February 07, 2012
Have you updated your apps lately? Do you know what updates you need in your app before you publish it to the market?
Post a Comment
Read more >>

Hey folks, a quickie. I've just released a country music app onto the market. Give it a spin if you're into country music.. Thanks for the support!
Post a Comment
Read more >> 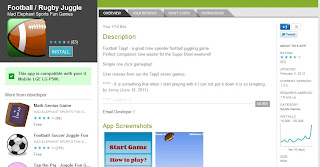 A quick little check - Super Bowl weekend So, how did it go for you over the weekend? Did you release an app related to the Super Bowl?
Post a Comment
Read more >>

The Music, the Bowl and the Icon..

A few stuff to look out for this weekend. Well, at least a few for me, and at least one for you!
5 comments
Read more >>

- February 01, 2012
Sometimes we just face a brick wall. No matter how hard you try, you just cant think of an idea to build your app for. And with no idea, there is no app. And with no app, there is no money... aww! You poor puppy!
4 comments
Read more >>
More posts