Showing posts from September, 2012
Show all

2nd Unity3D Game - from Idea to Market in 4 hours! 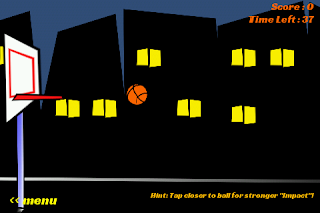 I've just released my 2nd Unity3D game to the market folks. It is a 2D basketball shooting / hooping / scoring game. The best part, as the title mentions, it took less than 4 hours in total to get the game from idea to published in the market! All done in Unity3D, with not a single line of code written! Give the game a go: Impact Basketball Some screenies: The Game in Action The very simple menu screen Yes, the game is very simple and basic, but the fact is, with proper tools like Unity3D and some other plugins, you can start churning out games at a very fast rate. Creating Impact If you've seen my previous game, Impact Jumper, you will now realise a recurring theme in my Unity3D games. This is because I am planning on releasing a few "Impact" series of games. Here are some screenshots of another one in the making: Flying through the air It looks like Golf! You can guess what game that is eh? There is another o
25 comments
Read more >>
More posts